Thursday begins the Premio Bonporti – music in the church, and in the palace, with creativity

“Church” music in the organ loft, “chamber” music in the palace. This is one of the novelties of the twenty-seventh Premio Bonporti, XII International Competition for Ensemble and 1st International Competition of Historical Composition. The public will have the opportunity to enter highly suggestive places in Rovereto, normally closed to the public – the splendid church of the Redentore, in Via della Terra, and the precious hall on the first floor of Palazzo Alberti Poja, in Corso Bettini, kindly granted respectively by Parish of San Marco and the Municipality of Rovereto.

In the Church of the Redentore the musicians will play on the choir loft, behind the grates, as happened in the famous Church of the Pietà in Venice, where Vivaldi taught, and the “putte”, orphans of great musical skill amazed visitors from all over Europe. Music that “descends from above” – an acoustic event full of spiritual significance. Instead, in the beautiful frescoed hall of Palazzo Alberti Poja, the public will find the intimate atmosphere that characterized chamber music.

In both places the performances will be repeated at 17.00 and 20.45, allowing a wider audience (and perhaps even some kids) to come to the competition. An attentive listener, coming to the two appointments on the same day, might notice some difference between the two concerts. In fact, groups were asked to embellish and improvise differently each time – customary in ancient times, but never required in a competition until now.

The musicians present are the finalists, drawn through a strict online selection. It is very pleased that in one of the groups there is both a Ukrainian and a Russian musician – a sign of harmony arrived in Rovereto City of Peace.The international jury chaired by the Argentine musician and musicologist Pedro Memelsdorff is particularly attentive to creativity – both for improvisation and for composition in a historical style- another novelty of this competition. Giorgio Pacchioni, Alessandro Ciccolini (Italy) and Elam Rotem (Israel) are known both as musicians and composers.

For the First International Competition of New Historical Composition, which takes place simultaneously with the one for ensemble, the composers will receive a theme drawn by lot, then they will have eight hours (in “seclusion”) to compose their pieces, according to the rules of composition. historical, a bit like Mozart did in the famous exam at the Philharmonic Academy of Bologna Then on Saturday 29 October at Palazzo Alberti Poja we will hear the compositions, performed by the composers themselves, either alone or with their own group.

The Academy of Ancient Music of Rovereto thanks all those who make the 27th edition of this competition possible: the Autonomous Region of Trentino Alto Adige, the Autonomous Province of Trento, the Municipality of Rovereto, the Caritro Foundation and the Parish of San Marco.

The international public will have the opportunity to follow the entire competition in live streaming from the Premio Bonporti website and also to vote online. The audience in the hall will be able to cast their vote on both Thursday and Saturday.

THE CALENDAR OF THE PREMIO BONPORTI :

Free entry – given the limited number of places, reservations are recommended: online at www.eventbrite.it or by phone at 0464 013048. 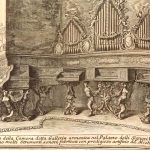 Composers! Come on your own, if you like,and play your own music New deadline for the Premio Bonporti – Thursday 20th October – For Ensembles too!News 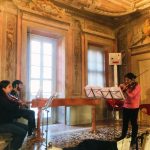 Come to Palazzo Alberti Poja to discover and hear the “chamber” programs of the composers and ensembles finalists of the 27th Premio Bonporti!News