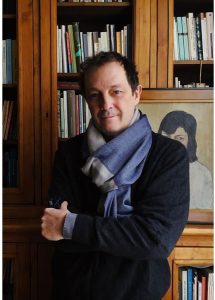 A music director, medievalist in musicology and recorder player, Pedro Memelsdorff was born in Argentina, graduated from the Schola Cantorum in Basle and the Sweelinck Conservatorium in Amsterdam, and obtained a Ph.D. in Musicology from Utrecht University.

As a musician, he has been a member of Jordi Savall’s Hesperion XX/XXI since 1981 and of a duo with Andreas Staier since 1984. In the late 1980s he played contemporary music with the ensemble Broken Consort Zurich. In 1987 he founded the ensemble Mala Punica, specializing in late medieval polyphony, with which he has performed over four hundred concerts in major early-music venues in Europe and America and published eight CDs that have received over forty international awards.

Memelsdorff and his ensemble Mala Punica have been Artists in Residence at the University of California Davis, at the Amuz in Antwerp, at the Fondation Royaumont in Paris, and Blodgett Distinguished Artists at Harvard University in 2014.

As a musicologist, Memelsdorff regularly publishes in the specialized press. He has authored a monograph on the history and codicology of the Codex Faenza 117 (LIM, Libreria Musicale Italiana, Lucca) and is preparing a further volume on the same MS for Brepols.